More than a year has passed since the economy pulled out of its COVID-19 recession, hiring started to improve and the stock market bounced back. Yet the pandemic continues to put pressure on the finances of millions of Americans, and it’s reshaping their thinking about needed products and strategies. Some […]

More than a year has passed since the economy pulled out of its COVID-19 recession, hiring started to improve and the stock market bounced back.

Yet the pandemic continues to put pressure on the finances of millions of Americans, and it’s reshaping their thinking about needed products and strategies.

Some people who were stricken with COVID-19 wracked up tens of thousands of dollars in bills to treat the disease and might have missed out on thousands of dollars more in lost wages. Medical debts remain a problem for many, but there are some strategies to help deal with them.

Unpaid medical bills are in some ways preferable to other types of debts, said Money Management International in a recent commentary. There’s often more flexibility in paying the charges, and interest and penalties rarely accrue, unlike with credit cards.

Before doing anything, people facing high medical bills should make sure the charges are accurate, the nonprofit financial counseling group suggests. Verify that the services performed were listed properly, along with the proper charges, dates and doctors involved. Bills can be confusing, so ask for explanations. If incorrect charges are discovered, request their removal.

Once you know the actual debts, and if you anticipate problems with paying them, contact medical providers to inquire about financial assistance. For example, you might be able to qualify for some “charity care” if you were treated at a not-for-profit hospital. Or you might be able to negotiate a reduction in fees or a long-term payment plan that you can afford, according to Money Management International.

Don’t charge the balance to a credit card if you can avoid it. “Medical debt is usually interest-free, so the debt itself isn’t costing you additional money,” the group stated. “Once you move the debt onto a credit card or loan, however, you’ll almost always start accruing interest.”

Plus, paying the debt on a credit card could disqualify you from receiving financial assistance or entering into payment plan.

“It’s likely better to wait and see what you can work out with the provider first before paying anything,” the group suggested.

If you have insurance and had a claim rejected, read the policy carefully and contact the insurer if you don’t understand why the company took that action.

“There are some simple errors, such as incorrect billing codes, that can cause your insurance to reject the claim,” according to Money Management International. “There’s a good amount of legwork involved, but ensuring that you’re getting the maximum insurance coverage possible is an important way to keep your medical bills in check.”

The open-enrollment season is nearing, and it’s not just about benefits such as mainstream health insurance and 401(k) retirement plans. The COVID-19 pandemic has fanned interest in broader health coverage, telemedicine and other insurance products and services, according to insurer Aflac in its new 2021 WorkForces Report.

Nearly half of American employees, 44{f9a9d0c078b99c5035c80896b16d2b484abb346d07724230e395ff1864e1808b}, have purchased at least one new health benefit in response to the pandemic such as critical illness coverage, hospital indemnity coverage, telehealth services or mental health benefits, the report said. Aflac surveyed 1,200 employers and 2,000 employees in June and July. Another finding: rising enthusiasm among employees for life insurance.

An Aflac report last year “showed that the pandemic was a wake-up call for workers to consider spending more time and effort in researching health care benefits during the open enrollment period,” said Matthew Owenby, chief human resources officer for the company, which provides supplemental insurance. “Now, we are seeing that wake-up call turned into action.”

Overall, 29{f9a9d0c078b99c5035c80896b16d2b484abb346d07724230e395ff1864e1808b} of survey respondents said the pandemic made them more aware of health-care costs and led them to change decisions on benefits such as critical illness insurance, which provides coverage beyond that provided by regular health insurance.

Brushing up on credit-score basics

One favorable, and surprising, result of the pandemic was that the credit scores of most Americans held steady or rose a bit despite job losses in some cases, increasing medical debts and other challenges.

Still, the same survey identified various misconceptions about credit, reports and scores, so it’s a good time to brush up on these topics, especially as some of the federal relief programs are winding down.

Among the credit myths cited by NerdWallet: Four in five respondents incorrectly think their credit reports include their credit scores. While the information contained in reports is used to calculate scores, the two are generally separate.

Also, nearly half of Americans think it’s better to carry a small credit-card balance to improve scores (usually it’s best to pay balances in full), and nearly half assume that closing unused card accounts will help.

Instead, canceling a card and losing its credit limit can hurt because it will alter your credit utilization rate (which measures how much of your available credit you have used). Also, doing so eventually will remove any positive payment history associated with the card, according to NerdWallet.

Despite all the financial and employment problems caused by the pandemic, consumer credit delinquencies 30 days or more past due fell to a record low in the second quarter, according to the American Bankers Association.

Financial health improved thanks to a robust jobs recovery and another round of federal stimulus payments earlier this year, said Sayee Srinivasan, chief economist and head of research for the association. Of particular note, delinquencies on bank-issued credit cards fell to 1.38{f9a9d0c078b99c5035c80896b16d2b484abb346d07724230e395ff1864e1808b} of all such accounts, the lowest level for this category since the ABA began tracking the data in 1993.

The near-term outlook might not bode so well, however, with federal relief programs winding down, interest rates and inflation pushing higher, the possibility of a slowing economy and ongoing struggles to contain the virus.

Money Management International, in a blog, suggests that now might be a good time to watch for signs of financial stress among friends or relatives.

You likely won’t have access to someone else’s credit report or score, but you might notice collection letters piling up or the person receiving phone calls from creditors. Other signs that can point to stress include friends or relatives seeming to live beyond their means, an individual being evasive or defensive when discussing finances or the person continually asking to borrow money.

Reach the reporter at [email protected].

Sun Oct 24 , 2021
ROCKINGHAM — A third COVID-related death for the week was reported Thursday morning by the Richmond County Health Department, bringing the month’s total to five. The latest death, combined with the two reported on Monday, brings the county’s overall total to 142 since the first was announced in April of […] 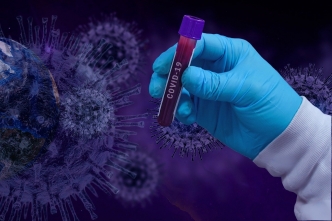