Beth Smith at a park near her home in Albany, Calif. Smith is part of a lawsuit against Kaiser Foundation Health Plan and a California state agency alleging discrimination against disabled people. (Josh Edelson/For the Times) Beth Smith dreads the day when her wheelchair finally gives out. The aging chair […]

Beth Smith dreads the day when her wheelchair finally gives out.

The aging chair has functioned as an extension of her body for roughly a decade, ferrying the 62-year-old to the transit station near her Albany, Calif., home; to the office where she works; and to medical appointments and other errands. When things break, she and her partner have tried to make cheap fixes with duct tape and screws.

But when it stops working for good, Smith will have to turn to her health insurance. And her insurance plan caps its coverage for wheelchairs and other “durable medical equipment” at $2,000 a year, she said — far less than the $17,000 cost of her motorized chair.

“I don’t know what I’m going to do,” said Smith, who has cerebral palsy.

For now, she’s going to court. Smith and other wheelchair users are suing over such insurance shortfalls, arguing that failing to effectively cover wheelchairs is discriminatory against disabled people.

The federal class-action suit targets the biggest commercial health insurer in California — Kaiser Foundation Health Plan — and a state agency that sets out minimum requirements for what many health plans must cover. If Smith wins in court, it could affect not only Kaiser members but also other wheelchair users with private insurance across the state.

The lawsuit says that a manual wheelchair meant for everyday use typically costs between $3,000 and $5,000, while a power wheelchair can range as high as $50,000 depending on the specific customizations and technology needed for the user.

Disabled people and their families have held online fundraisers on GoFundMe, hunted for used chairs on Craigslist and through friends, and tried to “MacGyver” faltering wheelchairs with spare parts and homemade fixes, advocates said. In years past, disability rights groups have tried to tackle the issue in the California Legislature and been thwarted over cost concerns.

“Historically, durable medical equipment” — such as wheelchairs — “has always been a weak point in coverage,” said Anne Cohen, a Bay Area disability and health policy consultant. Cohen sits on the board of the Disability Rights Education and Defense Fund, which is representing Smith and other plaintiffs in the case along with the firm Rosen Bien Galvan & Grunfeld.

“The challenge is that over the years, wheelchairs have gotten more and more expensive, and we’re seeing more and more skinny plans,” Cohen said. She chalked up the rise in wheelchair costs in part to many medical equipment suppliers going out of business because they couldn’t meet requirements introduced over the last decade for bidding for Medicare contracts.

Cohen said that health insurers in turn have sought to curb abuse after a rash of billing scams involving medical equipment in recent decades.

Even when wheelchairs are covered by insurers, they “each have their own really complicated medical management definition of when different types of wheelchairs are medically necessary,” said Dania Palanker, assistant research professor at the Center on Health Insurance Reforms at Georgetown University.

For instance, an insurance company might decide that a patient does not need an electric wheelchair — which is more costly — because they have enough strength in their upper body to wheel around a manual chair, even if that causes other issues, Palanker said.

Some plans will cover a wheelchair only if it is needed at home, which Palanker called “problematic” because some people “can maneuver through their home, but for any outings, it would be way too much for them to try to function without a wheelchair — say going to work or going grocery shopping.”

Palanker said the private insurance market “wasn’t designed to meet the needs of disabled people, because disabled people were not allowed” for many years. She said that before the passage of the Affordable Care Act, which barred health insurers from denying coverage for preexisting conditions, many disabled people would have found it difficult to get private coverage at all.

Christina Mills, executive director of the California Foundation for Independent Living Centers, said she would have had an easier time getting needed equipment if she were on Medi-Cal than she has had on her Kaiser plan. Medi-Cal doesn’t set an annual dollar cap for wheelchairs that are deemed medically necessary and will cover wheelchairs used outside the home, according to the California Department of Health Care Services.

Mills, whose organization is among the plaintiffs now suing Kaiser, has brittle bone disease and said she spent thousands of dollars to purchase a wheelchair that fits her body properly.

“My wheelchair is my legs,” she said. “Could you imagine determining whether or not you were going to get out of bed based on whether … your legs were going to be paid for?”

The California Department of Managed Health Care, the state agency being sued in the case, declined to comment on pending litigation. Kaiser did not respond to specific questions about its health plans but said in a statement that it was “proud to offer a variety of coverage options to meet the individual needs of those who choose Kaiser Permanente.”

“All of Kaiser Permanente’s health care plan options, including those challenged in the lawsuit, provide coverage as required by law,” it stated.

The lawsuit, filed in October in federal court, alleges that Kaiser and the Department of Managed Health Care have discriminated against people with disabilities by failing to cover wheelchairs as an “essential health benefit.” Under the Affordable Care Act, individual and small group health plans must cover such essential benefits without annual or lifetime caps. States each choose a particular plan as a “benchmark” for the coverage those plans must provide.

California lawmakers picked a Kaiser plan that does not cover wheelchairs as a covered essential health benefit, according to the suit. State regulations detailing the requirements, in turn, include only “a narrow list of durable medical equipment” that must be covered and omit wheelchairs without explanation, the lawsuit says.

“This is really impacting thousands of people with disabilities — at a minimum,” said Carly A. Myers, staff attorney with the Disability Rights Education and Defense Fund. Kaiser itself is a major insurer, and “because the state of California has selected the Kaiser plan as their benchmark, it permits that discriminatory policy to be replicated in other plans.”

Kaiser said in its statement that California lawmakers’ choosing one of its plans as the state benchmark “confirms that Kaiser Permanente health plans do an exemplary job of providing the essential health benefits required by the [Affordable Care Act] to protect the health of California citizens.”

Wheelchair users and suppliers say that annual caps on durable medical equipment — which includes a range of equipment such as walkers and hospital beds — are familiar features in insurance plans.

For many people who are not disabled and don’t have chronic conditions, their needs for durable medical equipment “are probably pretty limited,” said Bob Achermann, executive director of the California Assn. of Medical Product Suppliers. “If you break your ankle and need crutches, having a $2,000 cap probably is fine with you. But if it’s something more serious than that, it really gets expensive.”

Disability rights groups have raised the issue in Sacramento before: Thirteen years ago, a bill requiring health insurers to offer coverage for wheelchairs and other durable medical equipment to group purchasers won approval from California lawmakers over the objections of the California Assn. of Health Plans, which argued that it would increase costs and create administrative burdens for plans forced to redesign their coverage.

The association also argued that, in general, new mandates would lead to higher premiums.

The bill, SB 1198, was vetoed by then-Gov. Arnold Schwarzenegger over cost concerns, citing anticipated increases in premiums for private employers. The California Health Benefits Review Program, in its analysis of the bill, said it expected that premiums would rise but that those increases would be “largely offset by reductions in out-of-pocket expenditures.”

Those analyses were before the implementation of the Affordable Care Act. The California Assn. of Health Plans said in a statement that under the federal law, health plans provide coverage under the benchmark plan chosen by California.

“Any increase above and beyond the benchmark plan will increase premiums,” the association said in a statement, declining to comment further on the litigation.

Russell Rawlings, another plaintiff in the case, said his wheelchair and an added tilt option to prevent pressure sores cost roughly $10,000 — well above the $2,000 annual limit in the Kaiser plan he obtained through his employer, according to the lawsuit.

The 44-year-old has put more than 8,700 miles on his eight-year-old wheelchair, which sometimes suffers from power issues and just stops in the middle of needed trips in Sacramento.

Rawlings said he has been fortunate to have access to Medi-Cal and Medicare through a state program that allows him to be employed and maintain Medi-Cal eligibility. But he said that when he initially went to a wheelchair supplier to replace his chair, the company saw he had Kaiser insurance and told him it couldn’t replace his existing chair. He has since been back in touch with the company and is in the process of trying to replace it through Medi-Cal.

“Just yesterday when I was returning from the grocery store, the chair shut down on me,” said Rawlings, who has cerebral palsy and works as statewide community organizer for the California Foundation for Independent Living Centers. He was on the sidewalk near an intersection when the wheelchair stopped working. “Thank goodness I was in an environment where that was OK.”

Whenever it happens, he said, “there’s that agonizing moment of, ‘Is this going to be the last time? Will it not power back on?’”

Thu Nov 25 , 2021
If you’re still at a loss as to how to create a tasty, diabetes-friendly dish for your table, try one (or more) of the following recipes that are perfect on a holiday menu. These crowd-pleasers get the thumbs-up from diabetes experts. 1. Roasted Brussels Sprouts This recipe from Downshiftology offers […] 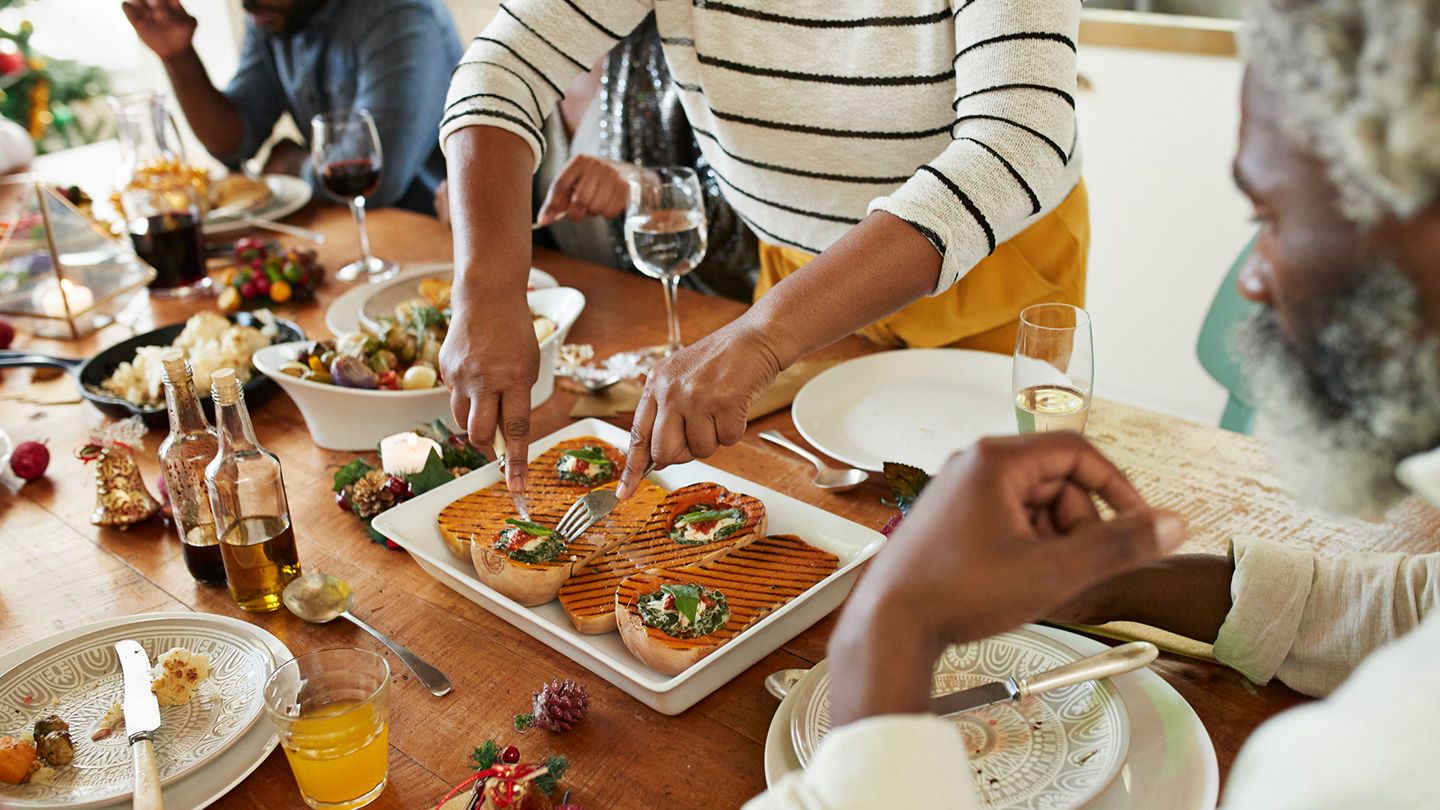